After the French food fest of Christmas and New Year’s Eve has finished, the arrival of January brings a national obsession with the galette or gâteau des rois – the “Cake of Kings.”

This scrumptious-looking cake, usually topped with a golden paper couronne (crown), can be found in your local boulangerie, pâtisserie, or supermarché from mid-December. In northern France it’s made of puff pastry filled with a dense creamy paste called frangipane. Some shops use hazelnut or pistachio flour instead of almond. In the south of France, it’s more of brioche bread with dried fruit pieces and an orange blossom flavour. Other variations can be found as well, from shortbread-style, popular in Western France, to those that have alternate fillings, such as chocolate-pear or raspberry.

But the pleasure brought by a galette des rois isn’t merely due to its delicious taste – it’s also the anticipation of wondering whether you will be the lucky one to discover la fève, a tiny charm, buried inside one of the slices. If you are, you’re “king for a day” and take your place in a 700-year old French tradition. 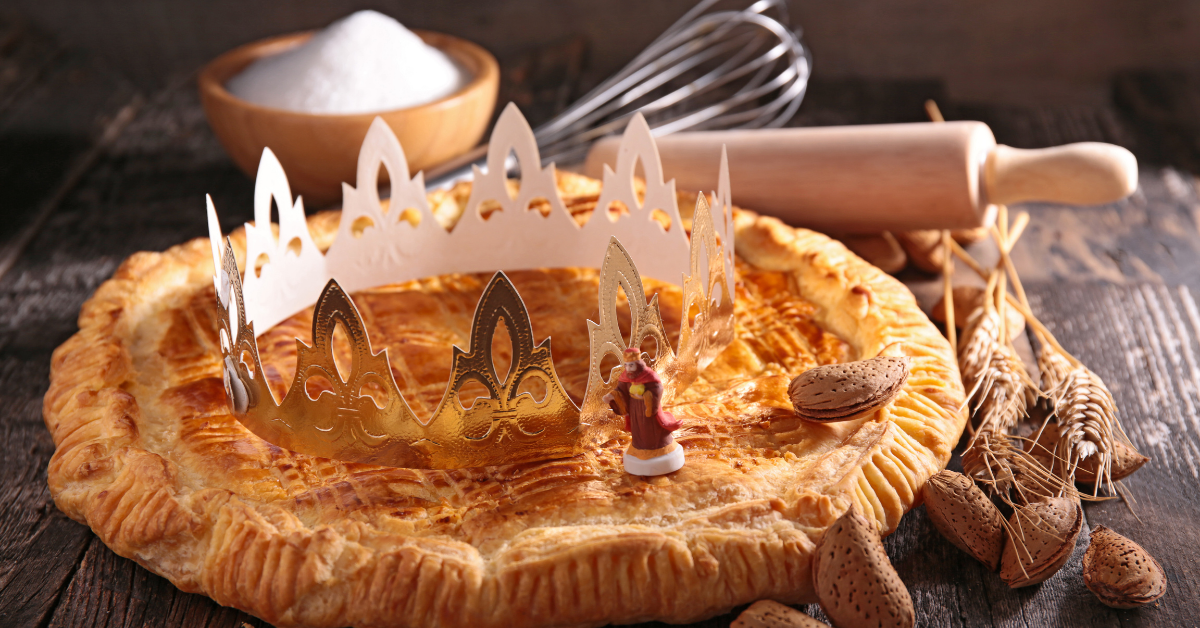 The French have been serving up galette des rois  since the 14th-century. Traditionally, it’s served on January 6th – the 12th day of Christmas – to celebrate the Epiphany, a religious feast day commemorating the arrival of the Three Kings to the manger where Jesus was born. Today, it’s eaten throughout the month of January and is simply a festive way to celebrate the new year with family and friends, regardless of religious background.

Tradition dictates that when serving galette des rois, the entire cake is divided into slices so that each guest receives a slice, plus an extra, symbolic slice called the part du Bon Dieu or “Good Lord” for any unexpected visitor, or poor person, that should pass by. In this way, everyone has the opportunity to “tirer les rois,” – or “draw the kings” – from the cake.
The “king” is represented by the fève, once a fava bean, now a porcelain or plastic figurine, hidden inside the cake. The person who discovers the fève in their serving is declared le roi (the king) or la reine (the queen) and gets to wear the golden paper couronne that comes with the cake. In some families, le roi or la reine has to buy the next galette des rois.

Kids and adults alike can get surprisingly enthusiastic about the winning of the fève – many people collect them – and playful accusations of cheating might occur. To avoid this, the youngest member sits under the table and calls out names at random as the slices are given out one by one, so the server can’t be accused of playing favorites!

Today, pâtissiers across France make their own versions of the traditional cake, and the fèves get more and more creative as well. Some boulangeries create special collections of fèves depicting modern themes from great works of art, to classic movie stars, or even popular cartoon characters. Naturally, if you are making your own galette, you’ll need to buy your own fève, which can be bought here:  http://www.fevesdumonde.com.

Why not try making your own?  It’s easier to make than it looks and takes only about an hour to prepare….but your guests don’t have to know that!

Method :
1) Heat the oven to 200C/fanC180/gas 6.
2) Peel the pears, slice them length-wise into quarters, remove core and cut each quarter in three slices.
3)  Glaze pears over medium heat in a large frying pan with melted butter.
4)  Sprinkle with 1 tablespoon of sugar to caramelize.
5) Heat the dark chocolate in the microwave for one minute.
6) Put one ready-made puff pastry on a baking sheet and spread with melted chocolate.
7) Beat together the softened butter and caster sugar until light and fluffy.
8) Add 2 eggs and vanilla extract into the butter-sugar mixture, then stir in the ground almonds.
9) Spoon the mixture over the chocolate, spreading it evenly.
10) Arrange pear slices on pastry and hide the fève.
11) Brush the edges of the pastry with water, then cover with the second pastry piece, pressing the edges to seal. Mark the top of the pastry from the center to the edges like the spokes of a wheel or in a zig-zag pattern, then brush with the last beaten egg.
12) Bake for 25-30 mins until crisp and golden. Serve preferably warm.

If you don’t want to make your own but want to come and try these delicious treats for yourself – why not come and stay at La Calade? You can have a look at our beautiful rooms here: 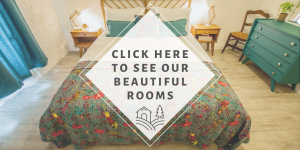