Cycling on the Canal du Midi

Cycling along the Canal du Midi in southern France is great trip, which you can fit into a week’s holiday. The 240km canal runs from Toulouse in the Haute Garonne to Sète on the Mediterranean Coast. The flat, picturesque route is divided into five stages, each around 50km long. 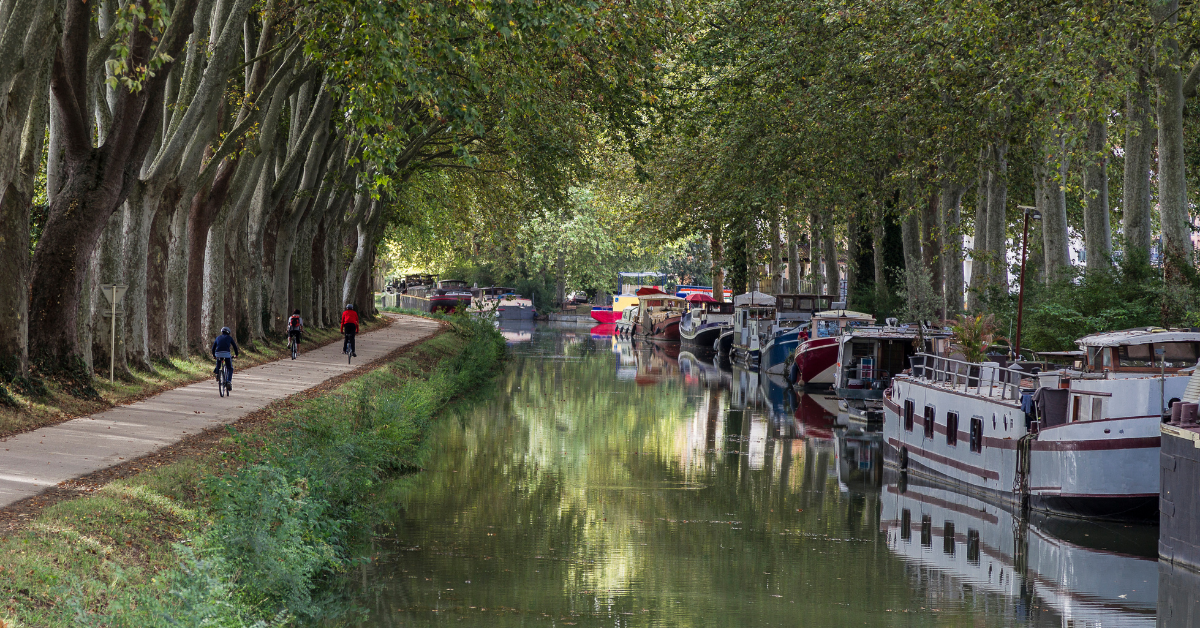 Suitable all year round. Busier and hot in summer, but with lots going on; ideal temperatures but higher average rainfall in spring and autumn; quietest in winter, but with Christmas markets and fairs.

Suitable for all abilities – cycling along the Canal du Midi is flat and car-free with optional slightly hillier excursions by road if desired. Can be uneven in places – hybrid or mountain bikes advised

Must Sees along the Way 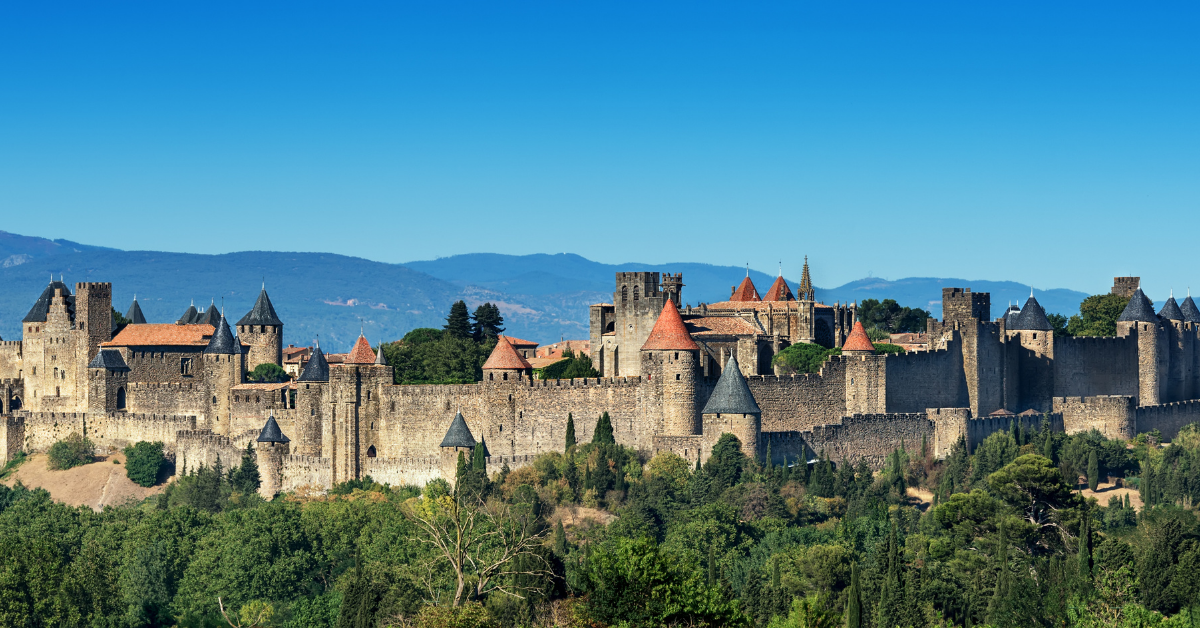 The History of the Canal du Midi

It had been the dream of many – from Caesar Augustus to Louis XIII – to connect the Atlantic and the Mediterranean. To provide a safe inland route that avoided the treacherous voyage around the Iberian peninsula with its storms and pirates. The lack of money and technical difficulties proved insurmountable until 1662.

A brilliant civil servant called Pierre-Paul Riquet had become obsessed with the project. He believed he had the solution. He proposed digging a canal between Sète and Toulouse, via Bordeaux and on to the Atlantic. Work began on 15 April 1667, with remarkable speed considering men were using picks and shovels to dig. In the process they removed 7 million cubic metres of earth over 240km. The Canal du Midi was completed in May 1681. 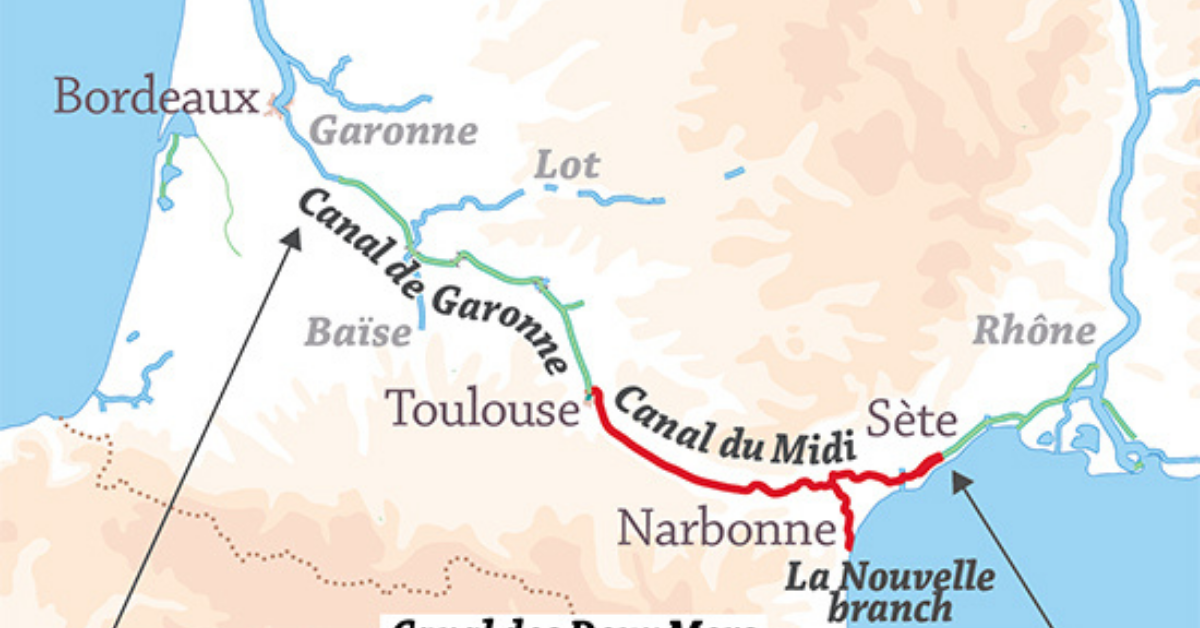 The Canal du Midi quickly became a major route for cargo and passengers, and opened cities such as Toulouse and Carcassonne up to trade. Specially designed freighters were built for the canal and towed by horses. These were capable of carrying loads of 120 tonnes – much more than carts travelling by road.

At any time there were as many as 250 freighters plying the canal, the journey between Sète and Toulouse taking about a week. The cargo was mainly wine, dried fish, cereals and fruit. Passengers, meanwhile, were carried on horse-drawn boats called mail carriages.

Haute-Garonne department of the Midi-Pyrenees

From the enormous Port de l’Embouchure in Toulouse, you cycle under the bridge and out on to the Canal du Midi’s towpath. You then pass the urbanisation of Toulouse and the railway station, Gare Matabiau, a statue of Riquet farewelling you as you leave. 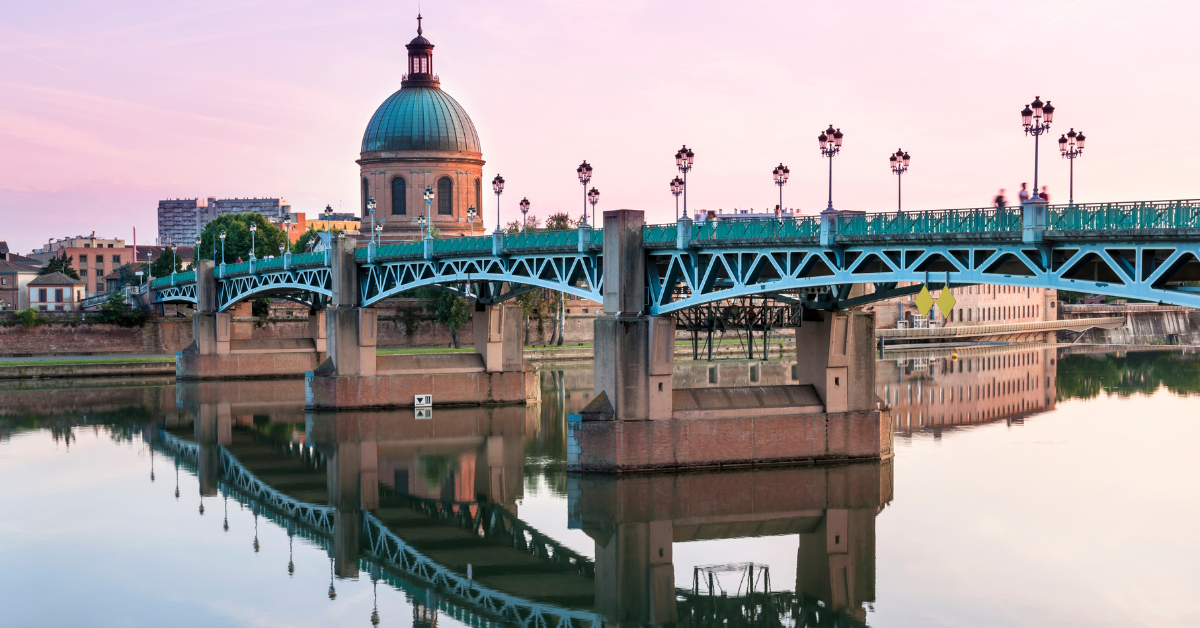 The canal weaves through the city suburbs and out into the fertile countryside until it reaches Escalqueuns. Following is Ayguevives Lock with its mill dating from 1831, then on through Sanglier Lock to Negra Lock. This was a ‘dinee’, a lunch stop, for passengers on the canal. A small village was built here to cater for those travellers; hotels, restaurants and stables, even a well preserved church.

There are three villages along this stretch, two beautiful and one eccentric. They are Montesquieu-Lauragais, with its two castles, and Villenouvelle and its superb bell-tower. On the other bank, Saint Rome is where an eccentric architect built a village in an assortment of styles: Moorish, Flemish, Neo-Byzantine, and also Baroque and Tudor for good measure.

It’s then back to the canal and normality, crossing the beautiful Lers Aqueduct, designed by Jean-Polycarpe Maguès, who was the engineer responsible for overseeing the construction of the canal itself.

Then it’s on to the ‘summit’, so called because it is the highest part of the canal. The Seuil de Naurouze is where the supply of water to the canal is controlled by a series of sluices. Here is both beauty and history. There’s an Arboretum, a spectacular avenue lined with 62 plane trees leading to an obelsik tributed to Paul Riquet. It is the place where a Napoleonic general surrendered to Wellington after the Battle of Toulouse and where an ancient Cathar fortress still stands. 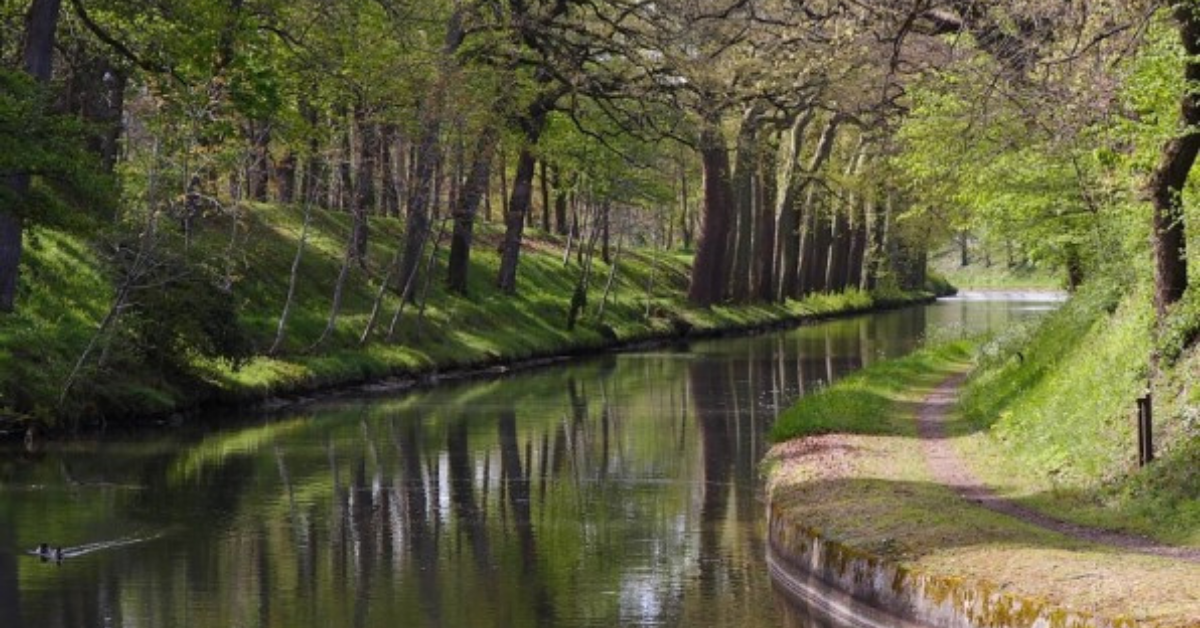 After Seuil is Mediterranean Lock; now you stop being an ‘upstreamer’ and become a ‘downstreamer’, the water now running towards the Mediterranean. The hillier terrain is noticeable and the locks more frequent as the canal begins its gentle descent to the Mediterranean.

One of the major ports on the canal is Castelnaudary, a picturesque town famous for its cassoulet. It’s now a slow meander through this peaceful landscape, pretty villages lazing under a warm sun.

The next stop is the UNESCO-listed fortified city of Carcassonne – a must-see, and it’s just a brief detour from the Bastide Saint-Louis, the town through which the canal actually passes.

From here, the canal – itself World Heritage Listed – closely follows the course of the River Aude through the gentle, hilly landscape of the Aude valley. This part of the canal is lined with ancient villages, their gothic and medieval churches, castles and ramparts all of interest.

There are some attractive locks, too, well tended by the ‘eclusier’, the lockkeeper; some, like Puicheric and Jouarres, provide cafes and ‘produits terroir’ (local produce) for sale. There is also Ecluse de l’Aguille, where the lockkeeper has turned his lock into a fascinating gallery of sculptures in metal and wood, also carving figures and faces in surrounding trees. 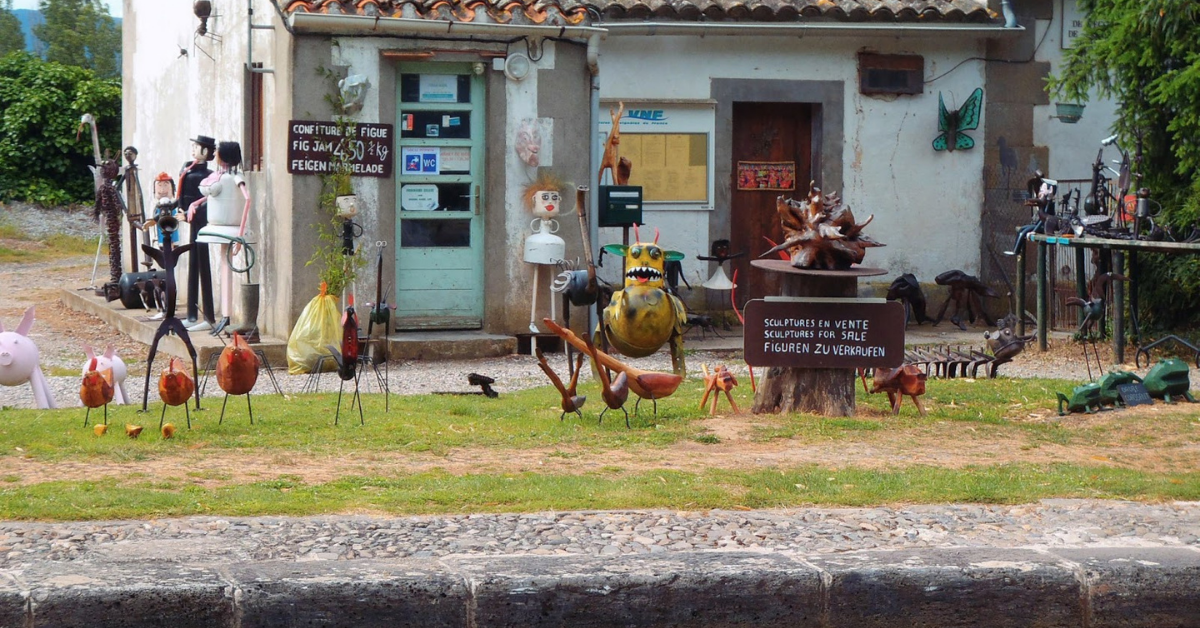 The small port of La Redorte was a ‘dinee’ for early travellers, and the tradition continues today with a quayside restaurant. From here it’s on to the once major port of Homps, now a large centre for pleasure boats, with plenty of restaurants, and lots of bustle in the port itself.

Farther down is the first canal bridge to be built in Europe, the Répudre Aqueduct, which crosses the river Répudre. A few kilometres on is the delightful port of La Somail, which seems to look very much like it would have 300 years ago when it was an overnight stop.

As you near Béziers, the canal weaves its way somewhat erratically through what was difficult countryside to cut a canal. The number of curves increases, sharp bends wend their way, and aqueducts abound – seven in total between Argeliers and Capestang. Other great feats of engineering are here, too: the first canal tunnel at Malpas and the Fonsérannes ladder, a succession of 8 locks, rising over 21 metres in the space of 300 metres. 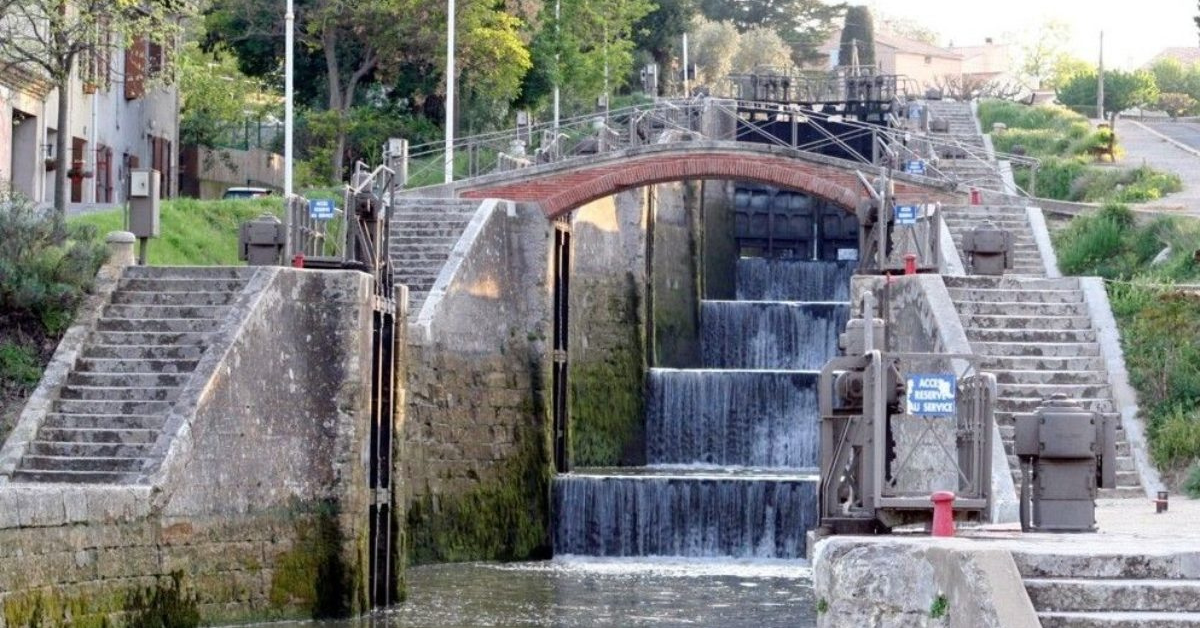 Béziers signals the last leg of the journey. Between here and the Mediterranean are the towns of Villeneuve-Lès-Béziers, and the picturesque Agde, founded 2500 years ago by the Phoenicians and today an architectural treasure trove. It is after Agde that you can smell the sea. The last 12 kilometres a cycle lane between the Bassin de Thau – a large saltwater lake – and the Mediterranean that leads you into the port of Sète and the end of your Canal du Midi cycling adventure.

https://www.relaxbiketours.com deliver bikes anywhere along the Canal Du Midi, from Toulouse to  Sète.  So can deliver directly to La Calade 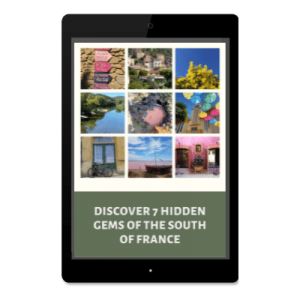